A little bit about me huh? Well let’s start with the basics! I am a twelve year old lil mutt and I’ve lived with my mom since I was a year old.  Before that I lived a strange life as a purse toy for someone who wasn’t really sure what to do with a dog. 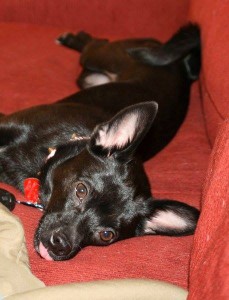 At the time of my adoption, I was delivered to her door by with all of my worldly posessions, such as a parka camo parka with a gold skull and crossbones, and polka-dot dress in my box of belongings. I was a scrawny little thing and mom thought it was just the way I was built. Little did she know that it was simply because I had never done normal dog things and had no muscle! Heck, I didn’t even know how to walk on a leash or wag my tail. Just walking around the block was exhausting and we won’t even discuss the confusion that arose around going potty outside

Fortunately, I acquired an amazing big siser, Marlo as well as a new Mom. Marlo showed me the ropes of being a dog (tennis balls are AMAZING) and my Mom’s refusal to treat me like a toy got me moving. I have long since learned to wag my tail, roll over for a belly rub and dance for cookies.  I have put on a couple of pounds of muscle mass and can run and play for hours. 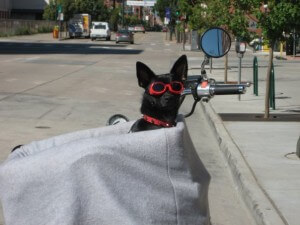 Best of all though, mom taught me to RIDE. I didn’t know that’s what she was planning when she brought home a large box and set it on the couch, but it only took me a day to realize that the box was padded and cozy. I spent a lot of time curled up watching TV from this box while wearing some new equipment called a harness. Then the box and harness vanished without a comment. It was very odd but I had plenty to learn in my new life, so I didn’t think much of it.

A few days later, instead of going for a walk, she put on my harness and we went downstairs and there was my box, mounted on the back of a black and shiny roaring beast called The Bike. Being the easy-going gal I am, I made myself comfortable and, while it was a bit nosier then the couch, I curled up and took a nap.

It wasn’t until the next day that I discovered what The Bike could MOVE! Mom took me for my first ride and right then and there I was hooked. 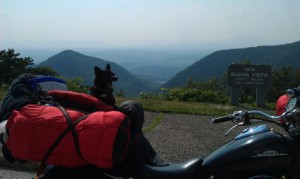 Over the years the box has changed, and gotten more comfortable. I was introduced to doggles (which I love as long as we are moving but I really don’t understand why someone would wear them standing still) and to super long rides. Mom and I have gone across the country a couple of times. When we travel we stay in a tent (sleeping bags are amazing btw) when we can, though we have stayed in hotels and even a convenience store once! We have met fantastic people and have seen amazing secenery. We have had our scary moments, from sliding on our side down the road in the rain to slipping and sliding in an unexpected hail storm, but we are both always eager to get back on the bike and explore the wide open road.

This site was originally designed to see if some of the hundreds of people on the road who photograph me would share their pictures. It has evolved in a way for people to share their photos as well as follow me on my adventures, as apparently people worry about a little dog on a bike getting to her destination safely. It makes me feel very loved.

Anyway, Mom say’s life is about living to the fullest and I am glad to share my adventure with you.

3 thoughts on “About Me”